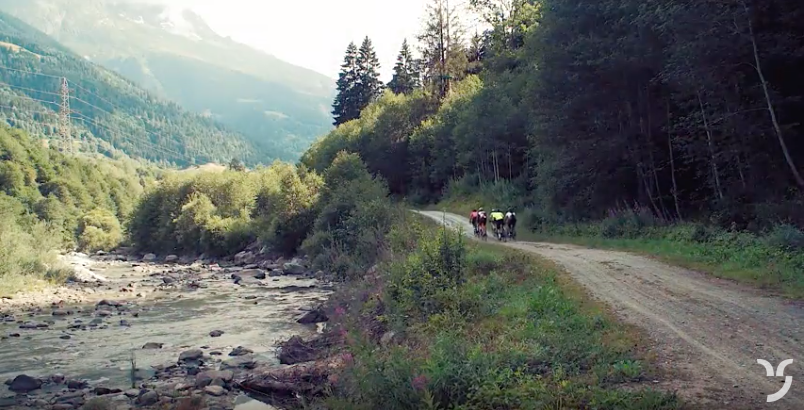 2000 to Today and the Re-Invention of the “Gravel Bike”

Contrary to the trend of the last decades, the mountain bike surprisingly seems to be losing its appeal. At the same time, the road bike for unpaved roads is just being reinvented as  a “Gravel Bike.” Due to the similarities to the cyclocross bike, the launch of the “Gravel Bike” is described as a marketing trick in which old wine is sold in new skins. This may be an apt description, but the puzzle still remains why the cyclocross bike experiences a reincarnation and why the “Gravel Bike” is perceived as a new type of bike.

A first explanation could be found in the transformation of the wider context of off-road bikes. Especially mountain biking – less in racing context, but rather in the leisure sector – seems to have evolved in a niche where emphasis is laid on descents with jumps on a full-suspension machine. Spectacular and thus attention-generating videos present the mountain bike increasingly as a machine for the very rough stuff. This is apparent in a promotional film from Red Bull that alludes to the evolution of mountain bikes. Moreover, advertising videos for holidays in the mountains of Grisons create an image of demanding trails that can only be mastered with a lot of experience, athleticism and some boldness. To venture on these routes, one must be a “Spinnsiach” [a “nutter” in English] or have the powers of a superheroine. The bicycle technology became more and more complex with shock absorbers, suspension forks, dropper posts and disc brakes. At the same time, the choice of possible mountain bikes became more varied and probably confusing for the beginner.

More experienced friends or reports from acquaintances may confirm this public image of the mountain bike on a personal level. This, in turn, could leave less daring, athletic or experienced riders behind (this experience has been poignantly described by British sports journalist Adele Mitchell). This development is reminiscent of the public perception of the high-wheeler, which was associated in the 1880s mainly with young, sporty and daredevil men, but also to the introduction of the light road bike of the 1950s, which was perceived primarily as a specialized sports equipment.

Although the mountain bike as a machine for  downhill fun has remained true to the original intention of its inventors in Marin County, many cyclists have used the mountain bike as an opportunity to be off on unpaved roads in nature or away from traffic. But you do not necessarily need one of these technically complex machines. A classic mountain bike with suspension fork is more than adequate for most users. While the mountain bike has began to evolve into a niche, there was once more room for a  straightforward, easy-to-use and versatile off-road machine. But since mountain bikes that fit these requirements  are still offered (such as cross-country, race or beginner’s MTBs), one must assume that there are additional factors why “Gravel Bikes” find buyers and that they’re perceived as an innovation in the field of off-road bikes.

A second reason could lie in the wider cultural context of the renewed bicycle boom since the late 2000s. Since the turn of the millennium, many young people have been socialized with second-hand racing bicycles rather than mountain bikes. The trend of the urban fixed-gear bikes has given renewed attention to the aesthetically and technically lean racing machine. Presently, young people, especially the trend-setters in the cities, mostly cycle on old racers – with or without gears – rather than mountain bikes. In this cultural context, innovations in road racing seem to be extremely responsive, especially when they promise versatility and freedom at the same time. Simultaneously when the cyclocross bike was pushed into a niche by the mountain bike and was thus forgotten, a new off-road racing bike can certainly be perceived as a novelty and as desirable.

Finally, the technical and geographical origin of the “Gravel Bike” could have been partly responsible for the fact that it was perceived as something new. A definitive history of the emergence of the “Gravel Bike” does yet not exist, rather its origin is still hidden in the mist of history. However, there is some evidence that its geographic origin is in the United States. There, the first long distance gravel races of the present times took place.

To takle these tracks, riders used mountain bikes, als well as cyclocross bikes or even ordinary road racing machines. In an interview, Joe Meiser, Product Manager at Salsa Cycles and “Gravel Bike-pioneer”, comments that he realized during such a race, that “you did not need that much bike”. He then introduced his team to the development of a new bicycle. In a story of the development of the “Warbird”, one of the first dedicated “Gravel Bikes”, Sean Mailen, a Design Engineer with Salsa, illuminates its origins: “In those days, we were mainly riding cyclocross bikes, or whatever road bike you had that could fit slightly bigger tires.” Even though the mountain bike revived interest in adventures off paved roads, the “Warbird” seems to be an offspring of the earlier cyclocross bikes. Surprisingly, they almost ended up where another mountain bike pioneer, Charlie Cunningham, has already been in the late 1970s.

Immediately with the launch of the newly developed bicycles, the still ongoing discussions started how to distinguish the new bike from the cyclocross bike. A longer wheelbase, more tyre clearance or the slightly lower bottom bracket are always named as the primary technical differences. Mostly, however, especially with the bicycles in the entry segment, there are hardly any differences. The efforts to differentiate the two categories seem to have grew more acute, as large, globally active bicycle manufacturers have adopted the trend of the “Gravel Bike” and popularized it worldwide.

If you read and look through the proliferating attempts to differentiate the bikes, at least two similarities are noticeable: On the one hand, the category of the “Gravel Bikes”, although only marginally differentiated from cyclocross bikes, is no longer doubted. On the other hand, the differentiation seems to make use not only of technical aspects but also of cultural elements. Mostly different historical origins of the “Gravel Bike” and the cyclocross bike are emphasized. The first stems from the United States of America and is associated with versatility, freedom and adventure, the other comes from Europe and is associated with specialized racing use. Although the “Gravel Bike” seems to have its origin in gravel racing, advertising and reviews seem to be dominated by images of freedom and adventure – not primarily competitive cycling. Actors in the secondary markets in tourism or clothing also take advantage of – and reinforce – these imaginations. With a “Gravel Bike” you can have fun on paved as well as on dirt roads and you can indulge in adventures with friends.

Looking back at the history of the off-road bike during the last 150 years, the technical-sociological insight is confirmed that innovations always require a social context that makes these novelties desirable. If this social environment is missing, then technical innovations can hardly thrive. This is particularly evident in the different innovations in the 1950s. Although these inventions were already visible at the time, they were not successful in the long term.

The history of the off-road bike also shows that the development of the cycle for unpaved and dirt roads is not a linear evolution in which the one type of bicycle – however accompanied by trial-and-error processes – has been developed from its immediate predecessor. The history of the off-road bike is rather a discontinuous story, in which the decisive impulses came mostly from diverse and different social contexts. At the beginning of the bicycle history, the state of the infrastructure was in such a way that the normal bike had to be an off-road bike avant la lettre. With the advent of the automobile and more and more paved roads, the bike adapted to the new conditions and became a delicate road racing machine. However, the inventors and popularizers of the mountain bike in the 1970s did not primarily built on the road bike, but on the older “Balloon Tire Bikes” from the 1930s. At the end of the 30-year mountain bike boom, where the mountain bike became a technically complex device, ideas of a lighter, more versatile off-road machine were able to succeed again. However, even though the latter innovators were inspired by the mountain bike world, the decisive impulses and technical templates came from cyclocross and therefore from a time before the mountain bike.

If one looks at this story from afar, one recognises that the off-road bike time and again developed into a social niche. It’s plausible to assume that the “Gravel Bike” has a similar future. Signs that this process has already begun may be already apparent: the gravel races, originally presented as an alternative to the established racing circus, are being professionalised. Not only racers of a UCI Pro Team ride the Dirty Kanza, but races with extensive gravel sections are newly added to the traditional professional racing calendar. From a technical point of view there are innovations like futuristic handlebars or groupsets specifically designed for the “Gravel Bike”. Those who regret this specialization, however, may find comfort in the history of the off-road bike. The story suggests that sooner or later a new off-road bike will emerge, which will once again be uncomplicated, comfortable and versatile.