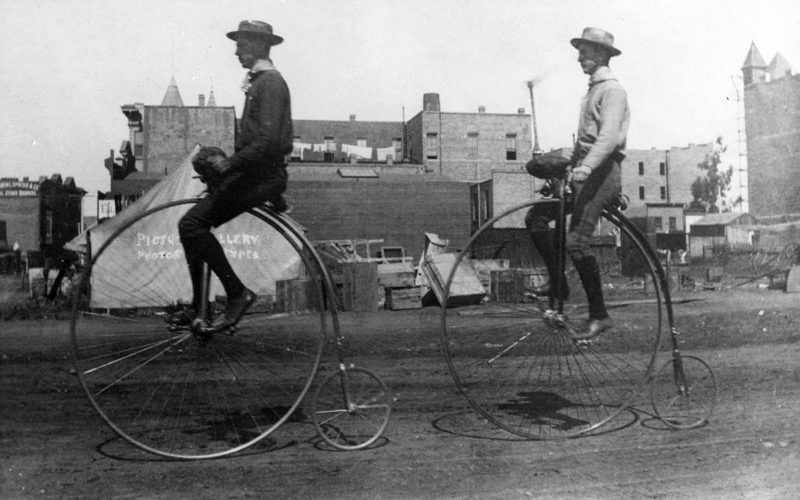 If you enter a bike shop or click through current offers of bicycle manufacturers, it is very likely that you encounter “Gravel” or “Adventure Bikes”. They are touted as a new kind of bike: They look like racing machines but have thicker tyres and disc brakes. At the same time there are the  long established categories of the cyclocross racing bike or the mountain bike. All of them are intended for off-road use. In the view of all these bike categories it seems undeniable that historical events repeat themselves and history is cyclical. The history of bicycle technology is a case in point. The crank drive experienced several renaissances, the air tyre was invented more than once and the bike with two equally sized wheels was repeatedly re-launched. At the moment the off-road bike experiences a rebirth as a “Gravel Bike”. Similar to the mountain bike, it promises fun away from the roads and heavy traffic.

However, since historical developments only seem to be circular, there’s a puzzle behind every appearance of something that has existed before: What are the specific circumstances at a certain time in history that past innovations will resurface? In essence, this is the same question you would ask if you’re interested in the success or failure of new innovations – or even in the reasons why things stay as they are. Technical aspects are never the only decisive factor in establishing an innovation. Technology always needs social contexts to be interpreted, adapted and accepted – or not. The history of the off-road bike shows how the perception of the technical machine, the social context in which it was used and the interpretation of the transport infrastructure were subjected to change that led to a repeated reinvention of the bicycle for unpaved roads – most recently the “Gravel Bike”.

I’d like to outline this development in four parts. I’m assuming that the history of the off-road bike is not a technical evolution which went from one technological step to the next. Instead, I’d like to tell the story of the repeated invention of the off-road cycle as a discontinuous sequence of technical developments, imitations and reinterpretations which each could be understood as a reaction against the established machine and its use at the time.

At the beginning of the cycle history, no specific bicycle had to be invented for unpaved roads. Every bike was a “gravel bike”. Roads with tarmaced surfaces were still very rare up until the 20th century. Early cyclists rode their machines in most cases on unpaved dirt roads. Dusty in summer, muddy in spring and autumn, frozen in winter, mostly speckled with potholes and rocks. Only with the help of enthusiastic and enterprising cyclists, the streets were increasingly paved.

The Boneshaker and the (Re-)Invention of the Pneumatic Tyre

In the early days, innovations in cycling technology were therefore almost always accompanied by the idea of ​​making cycling more comfortable. The inconvenient position in the saddle had even led to the nickname of one of the early bicycles. The “Velocipede“, developed in France in the 1860s, consisted of a wrought-iron frame with wooden wheels and was aptly nicknamed the “Boneshaker”.

Other inventions in the early history of bicycle technology also contributed to riding comfort. Although, surprisingly often they were developed with a completely different goal in mind. The high wheel of the “Ordinaries”, for example, was mainly devised to increase speed. However, at least since the introduction of the spoked wheel, the large diameter had also had a dampening effect.

At the same time riding the high wheeler was a delicate matter. A pothole, a larger stone or even an animal always harboured the likelihood that the rider would be thrown over the handlebars.

An invention that ultimately helped to make smaller and safer bicycles again, but without sacrificing comfort, was the pneumatic tyre. It was invented several times in the 19th century and popularized from the late 1880s under the name of John Boyd Dunlop. According to the sociologist and historian Wiebe Bijker, it is unclear what exactly prompted Dunlop to experiment with air tyres. One of the established stories tells that a doctor had recommended cycling to Dunlop’s son Johnny. The father, John Dunlop, was advised that it would be even more beneficial if the annoying clatter of the steel tyres on the cobbles could be reduced. However, there seems to be agreement on the secret nightly test ride when father and son convinced themselves of the dampening properties of the tyres.

The invention of the pneumatic tyre was as well a noise protection measure as it increased riding comfort. Nowadays, the use of steel tyres on bicycles is hardly ever thought of, so we interpret the invention of the tyres mostly as protection against vibrations and not as a measure to reduce noise emissions. Already a short time after his invention, when Dunlop came into contact with the bicycle industry and applied for a patent, the vibration reducing properties of the pneumatic tyres was the paramount argument. In the world of road-racing-enthused professionals yet another argument prevailed: The higher speeds that could be achieved with the pneumatic wheel ultimately led to the breakthrough of Dunlop’s invention.

As a result, the use of the bicycle continued to spread: As a comparably lightweight machine – aptly named the “safety bicycle” – with two smaller and equally sized wheels it was favorable for women wearing skirts – in these days still standard clothing for women – or for less adventurous and less athletic persons.